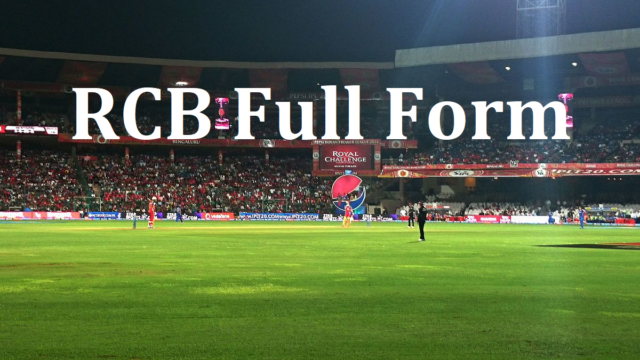 RCB stands for Royal Challengers Bangalore. It is one of the leading franchise teams of the Indian Premier League (IPL). Royal Challenge has formed this team in 2008 and the owner of this team is United Spirits Limited. It has participated in all IPL sessions but never has won any sessions. It was got the runner-up award many times. The home ground of this team is M. Chinnaswamy Stadium and RCB has played many cricket matches at this ground.

RCB meaning is Regional Centre for Biotechnology. It is a research, training, and educational institution established in 2006 under the umbrella of the United Nations Educational Scientific and Cultural Organization. RCB is located in Faridabad, Haryana, India. Moreover, it is affiliated with the Department of Biotechnology (BTD) and UNESCO.

RCB long-form is Regular Commissions Board. Officially it is known as Army Officer Selection Board (AOSB). The British Army has owned this Army Officers Selections Board. It was established in 1942 at Sussex and later in 1949, it was shifted to Leighton House in Westbury, Wiltshire, UK. Candidates stay for three days at the location of this board and various types of tests are conducted.

What is the IIT Full Form

What is the NEWS Full Form

What is the ASMR Full Form