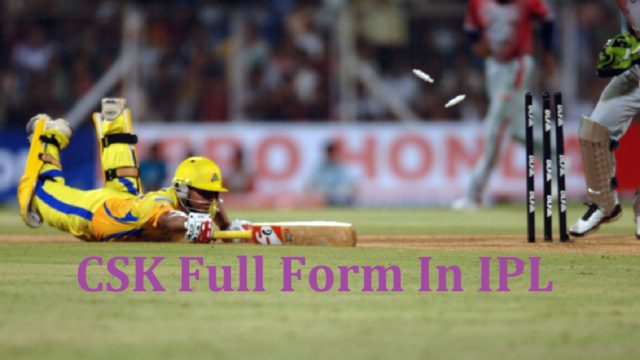 CSK stands for Chennai Super Kings. Its nickname is Yellow Army and it was formed in 2008. CSK is the franchise cricket team of the Indian Premier League (IPL). It is owned by The India Cements Ltd and Chennai Super Kings Cricket Ltd. This team was suspended in July 2015 due to owners being involved in a betting case. After its comeback, this team won the IPL title.

CSK meaning is Carmel School, Kuwait. It is a private catholic school established in 1969 related to all religious denominations in Kuwait.  Sisters of the Apostolic Carmel have formed this school. This school is well disciplined and well managed. The school system of this school is Co-educational. The main languages of this school system are Arabic, English, Hindi, and French.

CSK long-form is Chan Sui Ki (La Salle) College. In the Chinese language 陳瑞祺(喇沙)書院 is a Government-funded Anglo-Chinese Boys’ School. The motto of this school in the Latin language is Laus Deo Semper and in the English language is called “Praise God always”. This school is affiliated with Lasallian educational institutions.

CSK definition is Color Shift Keying. It is an intensity modulation that is based on a modulation scheme for visible light communication (VLC) and is outlined in IEEE 802.15.7.

What is the LIC Full Form