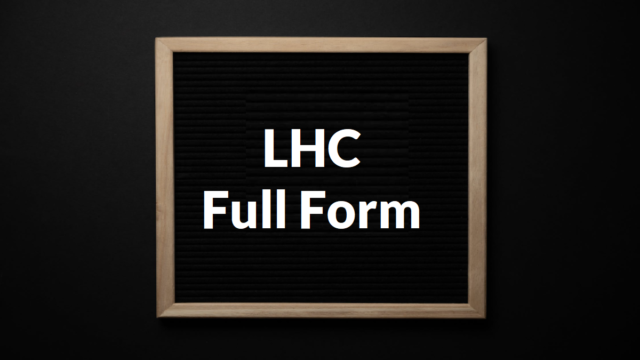 LHC stands for Large Hadron Collider. The Large Hadron Collider (LHC) is the world’s largest and most powerful particle accelerator. Located at CERN, in Geneva, Switzerland, it consists of a 27-kilometer ring of superconducting magnets with a number of accelerating structures to boost the energy of the particles along the way. The LHC collides beams of protons or ions at incredibly high speeds, and detectors observe and measure the results of these collisions, allowing scientists to study the structure of matter at its most basic level. Through this process, the LHC has allowed us to gain unprecedented insight into the fundamental particles that make up our universe. With its sheer power and scale, it is also a major player in the search for new physics beyond the Standard Model.

Launched in 2008, the LHC has produced some of the most exciting and groundbreaking discoveries in particle physics to date. In 2012, it famously discovered the Higgs boson—the particle that explains how particles acquire mass. More recently, experiments have yielded results suggesting evidence of the existence of the elusive dark matter—a form of matter that does not emit or reflect light, and as such is invisible to traditional astronomical instruments. This discovery has massive implications for our understanding of the universe and could open up a whole new world of physics exploration.

The Large Hadron Collider continues to be one of the most important and exciting scientific instruments in the world. With its ability to uncover new physics, it has revolutionized our understanding of the universe and continues to provide us with invaluable insights into the mysteries of matter and energy.

LHC long form is Lahore High Court. The Lahore High Court is the highest court in the province of Punjab, Pakistan. It was established in 1866 under the Indian High Courts Act of 1861. The Court hears appeals from all subordinate courts in Punjab and has jurisdiction over civil, criminal and constitutional matters. The current Chief Justice is Syed Mansoor Ali Shah who took office on October 3, 2017. The Lahore High Court is part of the judicial system of Pakistan and works under the Supreme Court of Pakistan. It is responsible for safeguarding the rights of citizens and upholding the rule of law in Punjab. The High Court has a wide range of powers to ensure justice and fairness including adjudicating on cases related to civil, criminal, and constitutional matters. This includes issuing orders, mandamus, and certiorari to ensure that justice is served. The High Court also has the power to review laws related to the provincial autonomy. In addition, the court can suspend or annul laws that have not been passed in accordance with the constitution of Pakistan. The Lahore High Court plays an important role in upholding the rule of law and ensuring justice for citizens in Punjab. It is a symbol of democracy, justice, and fairness for all.

What is the DC Full Form

What is the LBS Full Form