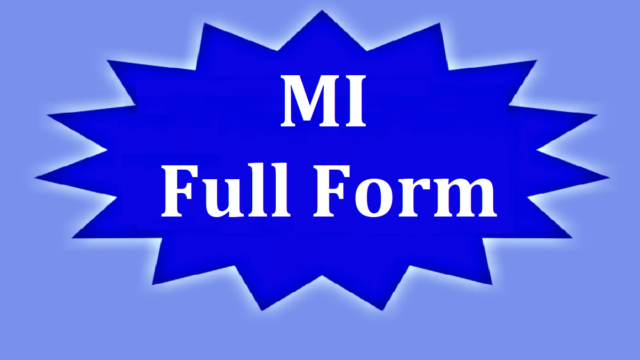 MI stands for Mumbai Indians. It is a franchise cricket team of the Indian Premier League (IPL). This team was established in 2008 and its colour is blue. It belongs to the city of Mumbai, Maharashtra, India. Reliance Industries are the owner of this team. MI is under the 100% owned subsidiary named India Win Sports. The home ground of this team is Wankhede Stadium, Mumbai, Maharashtra, India and this team played all its home matches in this stadium.

MI long-form is Mission Impossible. It is one of the earliest American TV series launched in 1966. Bruce Geller was the founder of this series. MI is based on an action and spy series. It consists of seven sessions with 171 episodes and its running time was 50 minutes.

MI definition is Measurement Incorporated. It is an educational testing company established in 1980 in Durham, North Carolina, the United States of America. Dr. Henry H. Scherich has formed this organization. It offers its products to its customers like PEG Writing, PEG Writing Scholar, and Utah Compose.

We can define MI as Military Intelligence. It is the branch of any military used to collect information. Military Intelligence also analyzes them that is later used by field commanders. The domain of military intelligence is broader in nature now that included various aspects like peacetime, strategy, tactical, period of transition of war, during the war, etc.

What is Message Short Form?

What is September short form